It’s been annoyingly cloudy these past few weeks, but I did manage a binocular tour with the 10×50 Opticroms last night near Craven Arms, about 1am. Very clear skies, and the Moon was quite low, (about 75% lit),  but it didn’t seem to hinder the seeing.
I’m not sure if I’ve seen Taurus this summer yet, but there it was lovely, Alderberran glorious with its ruddy hue, and Taurus is obviously a fine binocular target. Both the Hyades and Pleiades looked lovely.
And Auriga is now well above the horizon, (I’ve been watching Cappella skirt the horizon over the summer. It must be the lowest ‘circumpolar’ bright star at my latitude).
I easily found the Leaping Minnow asterism, that points to the open cluster M36, easily seen as a hazy patch in the bins. And below, M38 and M37, the three reat open cluster of Auriga.
I looked lower perchance to see the great Gemini Cluster (M35) but no luck yet.
I spent a clumsy minute looking for the square of Pegasus, which was much higher than I expected. Andromeda, to the left, was easily found with the Andromeda Galay a pleasing naked eye object. Through the bins it was a real treat, extending ghostly luminosity much wider than the bright nucleus.
The Triangulum  galaxy (M33) was very bright and big. I was very surprised, but look how high Triangulum is at this time of year! Most pleasing to see.
I’m ashamed to say I couldn’t locate supernova remnant M1. I simply don’t know where it is without a map.
The Double Cluster was easily found and beautiful. I followed the Perseus ‘river of stars’ down – it’s superbly placed in the early hours now.
Turning round, the star-fields of Cygnus are really something else under a dark sky. I tried to find the anvil-shaped open cluster of M29. But I was getting confused, as I imagined M29 to be where M39 is. No matter, I found M39 as a distinct triangle-shaped small, bright cluster. Of my three Messier ‘bibles’, the Messier Album gives the best representation and description of what I saw of M39 through my bins last night.
Mars was high and wonderfully pink, and a fireball/meteorite was seen, golden in colour and at least mag 4 plus, about 1.30, heading south-east of Cygnus. Magical!

…I was in France for the total solar eclipse. It was my first eclipse, and I remember being in two minds about where to try and see it. It would have been far easier to drive to Cornwall. And to see an eclipse on English (well, Cornish) soil, would have been wonderful. But the prospects for clear skies was better in France.
As it turned out, there was 100% cloud cover on the morning of the eclipse. And even as we drove to the observation site in Rheims, it was cloudy.
But, as often happens during eclipses, the temperature drop during totality thinned the clouds out somewhat, and we got to see totality. I took the photo below.
It wasn’t till seven years later that I got to see a complete eclipse, from first contact through. That was in Turkey, and it was quite amazing seeing it from a beach by the Mediterranean.
And of course, there was the Great American Eclipse of 2017. Another wonderful experience.
But you never forget your first one. It’s not just the sight of the solar corona, it’s the whole feeling of standing in the Moon’s shadow. The only time you ever can do that. And the many different effects… the false, unearthly twilight. And it got so dark, (because of the cloud cover). I saw the Moon’s shadow racing across the lake I was sitting by. I’ve never seen that at the other two eclipses, and I’ve looked.
Each eclipse is unique. People tell you that, and you can’t imagine they would be, but they are. France 1999 was so dark, and slightly sinister even. But I remember the champagne corks popping as the clouds parted, and the cheers and gasps as we saw the great ring of fire in the sky. I suspect we were even more excited because all morning we’d expected to be clouded over. There was only me and one old guy on the bus that were optimistic as we drove to the observation site. Weather changes quick – you can never rule stuff out.
Some people in the same park in Rheims didn’t get to see it totality. That’s so unfair. My friend who went to the Faeroe Islands to see the eclipse of 2015 had a similar situation, where some people on her trip saw totality and she didn’t. Luckily she came to the States in 2017 on the same trip as me, and got to see a complete total eclipse from first contact to last, and it was indeed magical.
But France 1999 will always mean such a lot to me. I dearly hope I get to see another eclipse but even if I don’t, I feel I’ve been so lucky to see nature’s greatest spectacle. 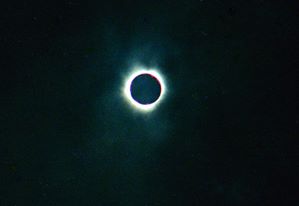 Totality in Rheims, taken with my Olympus 35mm SLR