With last week’s somewhat disappointing session with my 8″ reflector (and the damn dew), I decided to use the society’s go-to 8″ Schmidt–Cassegrain tonight. It was much warmer, and with no dew problem, I managed to get in a very productive couple of hours deep-sky observing. Am very, very pleased.
I started by looking at the great globular cluster M13, just because it was about the brightest deep-sky ob

ject I could think of, while it was still twilight. Then I returned to M65 and M66, galaxies in Leo. I’d done a quick sketch of these last week, (left).
I still couldn’t see the third galaxy of the ‘triplet’.
Then I looked for M105, and the mount took me to a bright-ish face on spiral, with another nebulous galaxy-looking object near. I’m glad I made a sketch, as I’m able to see that I saw NGC 3384. These were a pretty pair, and it wasn’t even dark yet.
Staying in Leo, I tried for M95 and M96, and both were easily found, and I expected them to be in the same field of view. They’re close, but even in the 25mm eyepiece, not close enough for keeping in the same field.
Leaving Leo for a moment, I had a quick look at the Own Nebula in overhead Ursa Major, (M97) then tried the galaxy M108, i the same constellation, which I’ve never been able to find*. Wow! I could easily see a structured edge-on spiral galaxy, (sketch forthcoming…). At mag 9.8, it’s little wonder this galaxy has been elusive, but with Ursa Major right overhead, it finally showed itself. Whooo!
There’s no official astronomical darkness now, we only get nautical darkness this time of year. But with Virgo in perhaps the darkest part of the sky, towards the south (in between the sky-glow of Wolverhampton and Telford I think), I tried to view a few of the Messier objects in that area which I’ve always struggled to find by star-hopping.
The area known as ….  (drum roll!), The Realm of the Galaxies.
M85 was my first attempt, and it was lovely to see! A face-on spiral, with a star right next to it. Quite bright, and very pretty, and only a mere 41 million light years away. This is actually in Coma Berenices, but it’s part of the Virgo cluster.
Next, M58 …which is the brightest of the Virgo group, according to my Cambridge Messier book, but my notes from tonight describe it as a ghostly spectre, quite large and wispy.
I really was in the Realm of the Galaxies by now, the sky was dark enough to allow me to navigate the galactic cluster with gusto. Next stop was, M60, and M59 in the same field of view.
The usually dependable website Clear Outside had forecast cloud cover around midnight, so I was mindful of getting the most out of the time I had. M49, one of the southernmost galaxies in Virgo was next, an obvious face-on spiral, with averted vision suggesting structure…
Oh, to see this through the 16″ mirror under a truly dark sky!
With the clouds threatening, galaxy M88 was another ghostly apparition, (inside a triangle of stars according to my sketch), more averted vision started to really bring out some detail, and it was there … then it was gone. And when I looked at Leo hovering over the lake I saw Regulus had lost its sparkle, the stars were dimming and the clouds and mist had scuppered my chances of seeing any more of those elusive Virgo galaxies.
But how lucky I’d been to see fourteen galaxies in one evening! How many millions and billions of stars would have made up the faint light that entered my retina tonight, as I drunk instant coffee and listened to the owls and the fish splashing in the nearby lake?
———-
*I’m afraid I’ve uttered a falsehood. M108 is in my Messier list. I can only think I must have entered it in my journal in the 90’s when I was using the mighty ten-inch Dob.
Or perhaps I saw it in my 4.5″ Tasco? 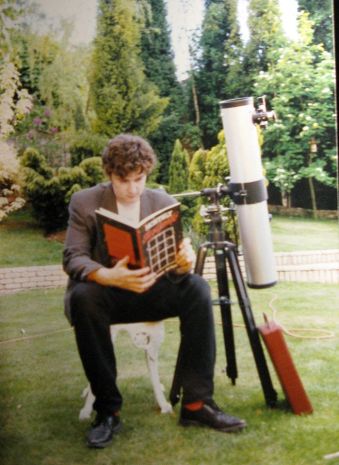