….is almost over when it comes to ‘free time’ away from town. I’m hoping to catch some clear skies in the magical Elan Valley next week. Last October was fantastic, with three clear nights on the trot. If I get one, I’ll consider myself lucky.
I’ll be taking these with me. A pair of Helios 15×70 bins that were donated to the local society.

I managed some observing at the beginning of last week. Saturn and Jupiter are kind of playing see-saw in the South, south/west at the moment. Saturn was particularly clear and crisp at the beginning of last week, and markings on the disc could be seen through my 8″ reflector. Jupiter was less impressive, in fact, I had a better view of it through a smaller reflector at Perton Library the week before.
With Sagittarius quite low, and not too many stars recognisable, I used the 10×50 Opticroms to check out some of the Messier objects. There’s rich pickings in that constellation. I had

a lovely view of M22, and over to the right, the ‘in a line’ objects of M21, M21 and M8. Another reason I moved to the bins, is because the slow motion knobs on the scope’s mount had somehow gone missing. Found them now, but a bit annoying.
M20, the Triffid Nebula, is in the Scutum Spiral Arm of our galaxy, I read recently. I need to find out more about the geography of the Milky Way. I was able to capture the Scutum Star Cloud on film, (well, on pixel), last October. Here is one of my photos. 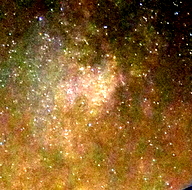