In a bid to get a clear southern horizon with hopes of seeing Saturn, I drove out to Bobbington and parked opposite the small airport of Halfpenny Green. I don’t like taking the telescope out to public places, I don’t think any amateur astronomers do. With my camera attached, there’s over £1,000 worth of gear at the roadside. But I was desperate to get a sighting of Saturn.
I waited for half hour before it appeared above the trees at about 11.00pm. It’s been a hot day, and through the haze, with the cooling down of the air, the turbulence was so intense at times, I could hardly see the ring system. It was dancing about like a fish on a pole. Also, the planet appeared redder than I’d ever seen it. Why was this, I wonder?

I fear Saturn won’t be well placed for UK views for a few years. I did manage to get a picture, and I’ve not changed the colour, so you can see the ruddiness. Next week, hopefully, I’ll get in some proper late-night sessions when the planet’s higher. 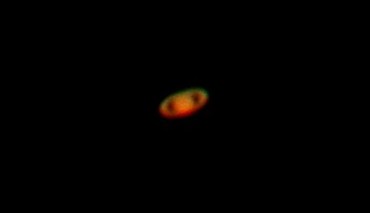 I’d have also liked to have taken some constellation photos of Saturn’s position, but the Fuji camera I use (which gives me a nice wide aperture), is needing to be sent for repair.

So, one fuzzy shot of a beetroot Saturn is all I came back with. But it was a lovely night, the first balmy evening of the year I think.